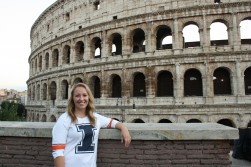 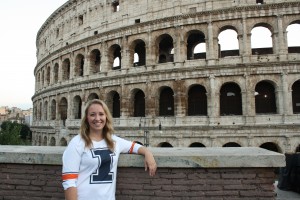 My excitement about going to Rome was partly because the ADM Institute for the Prevention of Postharvest Loss sponsored my trip, and partly because I knew I could find delicious, homemade gelato on every street corner. I had minimal knowledge about postharvest loss issues before departure, but I was fully aware of my love for food. This was my first trip to Europe, and I barely knew the people I was traveling with. But none of that mattered as I was able to bond with my fellow students, faculty members, and attendees from 62 other countries over conversations about postharvest loss and conversations while also indulging in delicious Italian cuisine.

Postharvest loss is a term that encompasses all food waste after the food leaves the field. It can occur because of poor storage, long transportation distances, lack of processing, consumer waste, and more. One-third of all food that is produced is wasted. We heard that statistic countless times, and it is one that I will never forget. Hopefully, that number will continue to decrease along with the number of starving people in the world. I discovered that solutions to reducing postharvest loss are not complex. Airtight storage bags, refrigeration, processing centers, and increased conscientiousness are all relatively simple ideas that have drastically been decreasing losses. These are already options for countries that have an abundant food supply, but these options are often taken for granted. The challenge is bringing these technologies to rural areas in Africa and Asia while also securing funds to support these technologies.

I was thrilled that most of our meals included dessert, and when they didn’t we would seek out the most authentic-looking gelato shop we could find. The other students and I found that in Italian culture, meals are a time to socialize and enjoy each other’s company. They lasted about three hours each time. During our meals, we got to our fellow students, the ADM staff, and the other attendees. At one dinner hosted by the American Society of Agriculture and Biological Engineers, I sat at the same table as President Emeritus Robert Easter. I was eager to talk to him the entire conference because he is an animal scientist like myself, and we both share an interest in swine nutrition. Our three-hour meal was an ideal time to exchange introductions and discuss how the animal industry plays a role in feeding our growing world.

This experience taught me about collaboration more than anything. Different parts of the world may be facing different issues relating to hunger, but they can come together in a setting such as the PHL Congress to discuss those differences. They can then form a plan of action to catalyze change in all nations. Strength in numbers is not a cliché when it comes to solving postharvest loss issues. Some of the best conversations were during our three-hour dinners. The entire table would participate in the discussions while sharing the delight of Italian food. Hopefully, more of the world will soon be able to share the happiness we experienced while conversing over dinner. We work towards reducing postharvest losses so that we can sustain the human population. Not only that, but we do it so that other bonds can be formed and other ideas exchanged over a plentiful, nutritious meal.