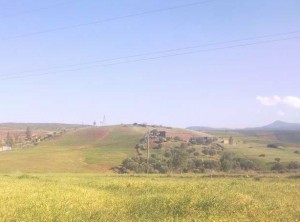 Olive trees on a hill in the High Atlas Mountains, South Marrakech, Morocco. Olive trees are traditional and their oil is used in food and medicinal recipes. / Photo credit: M. Bounfour

Our participation to the congress allowed us to be exposed to a wide array of expertise and a global audience in a very short time.

We could see thousands of field experiences, implementation approaches and questions not yet answered at a national, regional or global levels. What was mainly striking was that so many technologies were developed but still unknown to smallholders in Morocco. We also realized the importance of data collection methodology and its impact on technology development for PHL prevention.

A first road map to reducing postharvest losses was developed during the international congress on PHL. It envelops all the supply chain from production to market.

Coming back home, we decided to collaborate and started drafting projects around these two areas:

To make technology available to smallholders, we decided to start with olive and olive oil since we have already developed an approach. Contacts have been established with three NGO’s located in mountainous areas in Morocco.

Access to technology for preventing losses is very limited at all the supply chain stages in olive and olive oil production in mountainous areas. Olives that escaped fruit fly infestation are harvested by beating the branches. These beatings injure the fruits, which makes them vulnerable to mold attack during transport and storage. These losses may be as much as 30%. Mold in injured and fly-infested fruits increase oil acidity thus reducing its nutrition quality.

In addition to injury, the following year production is reduced due to loss of flowering parts during the beating. These losses may be as much as 100% in some areas. This causes olive trees to produce on alternate years.

The model suggested is based on addressing causes rather than symptoms for mitigating postharvest loss (Sonka 2015). It appears that the best approach is to improve harvesting and storage methods to help reduce losses due to mold during storage and also help increase production.

Tools have been developed for control of olive pest and also for an effective harvesting. We suggest that these tools be developed locally with affordable equipment. Workers should be trained to make these tools and also training should be developed on-farm to use them efficiently.