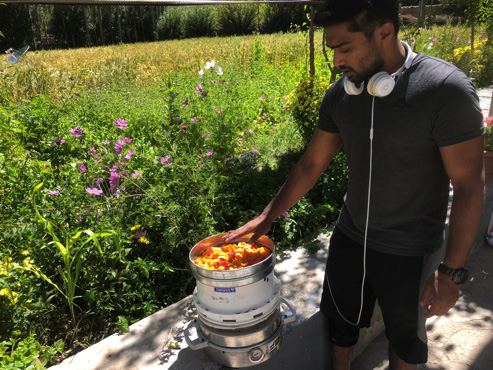 Over the past few years, University of Illinois professor emeritus Bruce Elliott-Litchfield has developed and refined a stored solar thermal technology called Sun Buckets. While the most prevalent use of Sun Buckets has been for cooking, Litchfield envisions wider applications for its use.

In Haiti, a substantial amount of the peanut crop is lost after harvest to a number of factors, including animals and poor drying and storage conditions. Warm and humid temperatures during the harvest season make air-drying difficult. The process generally takes four to five days, and farmers often pick the crop and store it in their homes overnight to avoid theft and pest damage.

In 2018, Litchfield received funding from ADMI to design, build, and test a prototype dryer that uses stored solar energy, the technology behind the Sun Bucket, to dry peanuts in Haiti.

Litchfield’s team designed and built a prototype dryer that successfully ran for more than 7 hours from the energy stored in a standard Sun Bucket. The dryer achieved airflow rates between 10 and 15 cubic feet per minute (CFM), which is appropriate for drying two bushels of peanuts.

Litchfield had planned field tests in Haiti, but political situations made that location impossible.

Instead, the team tested the dryer in Illinois with rewetted and wet/green peanuts. One Sun Bucket was able to remove 1 kg of water from about 2 bushels of rewetted peanuts in seven hours, which was in line with expectations.

The dryer was also tested for drying produce for later consumption. The team tested the dryer with apricots on a family farm in India, where dried apricots are a valuable cash crop. The dryer completed the task in about one-half of the time that air-drying normally takes, and the quality of the dried apricots was good.