by Steve Sonka, Research Professor, ADM Institute for the Prevention of Postharvest Loss

Recently, we’ve seen a reawakening as to the potential benefits from preventing postharvest loss (PHL) – improved smallholder farmer (SHF) well-being, improvements in sustainability, and enhanced food security. A less recognized dimension, however, is that the inability to effectively store produce also acts a “hidden tax” – beyond the direct physical losses.

PHL and the Hidden Tax

Let me describe this “hidden tax”.  Recently, I participated in a workshop of agribusiness executives interested in postharvest loss reduction in Africa. We reviewed findings from a recent World Food Programme project [1] assessing PHL among 400 SHFs in Uganda/Burkina Faso. Results from traditional storage methods are displayed here. 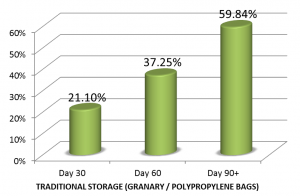 The results are dramatic and the key implication straightforward – traditional storage losses are unacceptably large. One African executive commented, “In reality, no one stores their grain for 60 or 90 days – because of the type of losses shown here.”

For the SHF, produce often is sold at harvest when prices are low and then purchased for consumption later when prices are higher. Selling at harvest also means that the SHF doesn’t participate in the marketing process. Instead they are trapped in a sell low/buy high cycle.

While scant, there is some evidence of the financial impact of this hidden tax.

Commodity prices typically are low at harvest and then rise until the next crop. Agricultural economists have quantified this relationship in eight African countries [2]. Overall, prices in the high month were 184% higher than those in the low priced month. (Country ratios are in the image below.)

While these price differences indicate that there are economic benefits of storage to SHFs, there also are additional costs. Fortunately, we can look to additional work [2][3][4] as to the net benefits of SHF storage. Table 1 shows that effective storage (here, PICS bags) has a positive impact on SHF income. 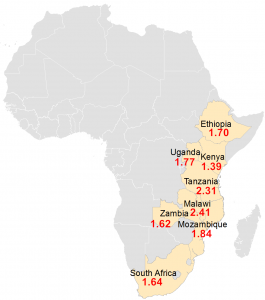 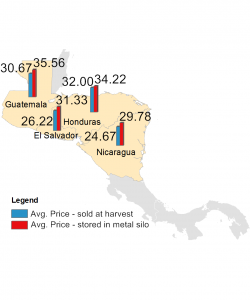 The Postcosecha Program in Central America provides additional evidence of the hidden tax effect. Over 20 years, the Swiss Agency for Development and Cooperation (SDC) successfully fostered the adoption of metal silos for grain storage in four countries. With approximately 670,000 metal silos transferred, 415,000 rural households were helped, preserving about 380,000 tons of grain annually [5].

Post-program impact assessment indicated that maize farmers using metal silos received a higher price than those selling directly after harvest. In 2009, silo users received an average price of $32.44/100 kg while non-silo users received an average of $27.78/100 (see map above). Generally, metal silo users gained 23% more than non-users [5]. For a medium size farm, the benefit-cost-ratio (BCR) was 2.6 and the internal rate of return (IRR) 55% – with partial subsidies. Without subsidies, the BCR was estimated to be 1.4 and the IRR 22% [5].

Systemic Effects of the Hidden Tax

These data supports the relationship between postharvest storage and enhanced SHF well-being. Additionally, important systemic benefits arise when SHFs are engaged in the marketing process. In my boyhood farming community, I saw how marketing of stored commodities expanded SHF decision-making perspectives.

The ADM Institute for the Prevention of Postharvest Loss is currently working on a learning assessment of global food loss as part of a grant supported by the Rockefeller Foundation for the Waste and Spoilage in the Food Chain Development Initiative. For more information on this project, please click here.

This blog post is part of series that highlights outcomes and learnings of the Global Learning Assessment project. This is the second post in this series. View the first post here.