By Natalie Ferris, senior in horticulture at the University of Illinois at Urbana-Champaign 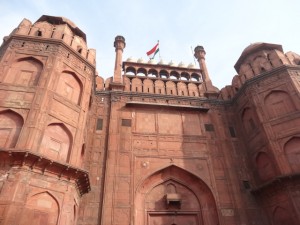 After our long journey from Chicago O’Hare, we finally reached Delhi! Upon leaving our plane, I glanced out the window noticing a thick, dense fog. The enchanting fog crept all the way into the terminal, gates and baggage claim. Surprisingly the air was humid and warm, with a cooling breeze. The minute I walked out of the terminal with my peers and faculty, I noticed the deep, suffocating effect the fog had on the city.

After reaching the hotel around 2 in the morning, we all went to our rooms to crash. In the morning, the group met for a delightful, colorful breakfast. The breakfast at our hotel was delicious and superb! The buffet made me feel like a child entering a toy store the day before Christmas. There were fruit and pastries galore. The center table tempted us with lassi, gulab jamun, juices, passion fruit, vegetable dishes, yogurt, and much more. Everyone at the table was stuffed from overindulging in the tasty food. The waiter came around and delivered each of us Marsala tea.

Today was filled with good food, dodging cars, and lots of sightseeing. We visited the Red Fort, which is a massive castle-like structure in India. The terrorizing walls and moat prevented people from entering the king’s palace, when there was still a king living in it. Since then, a lot of the marble and gold have been stolen or looted by the British or Pakistani kings. The buildings hold unique pulchritude features that still uphold their character to this day. Many of the buildings contained artifacts and treasures from previous kings and rulers as well as remnants from Gandhi. India was under attack by Britain during the 1800s, but through the power of freedom fighters and influential leaders, India was able to regain independence around 1947.

After more sightseeing, we went to some markets around our hotel and an underground market as well. There is a lot of smog and trash everywhere we go. Almost every person is trying to sell you something. I observed constant yelling, and car horns beeping at each other at all hours of the day. The city is very lush with cover from trees, and birds are always within view. As for me, I am just about to “hit the hay” as my mom would say. So, good night Delhi, good night everyone. I am looking forward to seeing the Taj Mahal tomorrow!

Natalie is a participant in the ACES 298: Postharvest Loss Prevention class organized by the ADM Institute for the Prevention of Postharvest Loss at the University of Illinois at Urbana-Champaign. Throughout the 12-day trip, students interact with policy makers and business partners in the agriculture industry, and work with fellow students at Rajendra Agricultural University (RAU).

Travelogue 2: Fascinated by Indian culture, architecture
Travelogue 3: Leaving the city behind
Travelogue 4: Diving into PHL studies with RAU partners
Travelogue 5: To the villages of Bihar, we went
Travelogue 6: Stress in numbers for India rice losses
Travelogue 7: These issues impact all of humanity, we need to learn to work together
Travelogue 8: Like Buddha, seeking enlightenment through partnership
Travelogue 9: Drones, sub-surface irrigation, and other ‘game-changing’ technologies at BISA
Travelogue 10: A fond farewell to India