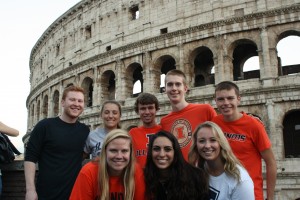 How did I end up in Rome after only being in college for two months? I took the right class (Water in the Global Environment) with the right teacher (Dr. Prasanta Kalita) who was hosting a conference (the First International Congress for the Prevention of Postharvest Loss). I power wrote an essay and road a wobbly rental bike to the nearest U.S. post office between a highway and a cornfield to expedite a passport. My expedition to the post office was worth the sweat and extra time because the next thing I knew, I was on my way to Rome.

In October 2015, I attended the First International Congress for the Prevention of Postharvest Loss put on by the ADM Institute that would bring together more than 260 people from 62 countries to share their knowledge about reducing postharvest loss (PHL), the loss of agricultural product from the time of harvest to consumption. The other students and I, as “PHL Scholars”, would help the ADM Institute staff run the Congress while taking notes at the sessions to learn about PHL and write a research paper.

When I first heard everything we would have to do, I was overwhelmed. I had so much to organize and did not know where I would fit in an extra research paper. Either way, in three weeks, we were landing in Rome at midnight our time, 7 a.m. Rome time, and we had a full day ahead of us.

The first morning we had a little time to explore and to try to take in the peculiar city of Rome, paved with inconsistently-worn cobbled roads, lined with different-colored buildings, small European cars, and strange trees. After only five minutes of walking, we came to the Colosseum that only gets bigger and older the closer you get to it. We took the obligatory picture in front of it, and on our way back to the Congress, tried our first Roman gelato.

Throughout the Congress, I was continually astonished as I met and saw people from all around the world. I met two people from Ghana, a few from Kenya, then India, and Uruguay, Bangladesh, the UK, California, and more from UIUC. Even more astonishingly, they were all there to address the issue of postharvest loss, a much more serious and complex issue than I had ever known.

During the Congress, we heard from leaders and researchers from a variety of organizations and universities (including USDA, FAO, UIUC, ADM) about how PHL can be reduced to both increase the food supply and bring food security to rural farmers. The consensus was that the technology exists; we just need to get it to rural farmers, provide them with education, connect them to a reliable market, and do all of that within a regional and cultural context. Simple! … Not that simple. Luckily, the experts were there to work out the kinks of all of that happening at once over poster, panel, and speaker sessions split comfortably between Italian pastries at breakfast and pasta at lunch.

On the trip, I got to know the other students and staff from the ADM Institute, and experienced as much Italian culture as we could fit in during our short week there. Between sessions and at night, we did a little bit of sightseeing, enjoyed many drawn-out Italian dinners, and tried weird flavors of gelato. One night we weaved between streets to a restaurant and the Trevi fountain, whereas another we ate on a high hill overlooking the twinkling lights of Rome, learning a little bit of Italian together along the way.

All too soon, we began the day-long journey home. First by plane back to Detroit and then to Chicago, and finally by bus to UIUC. It was a long bus ride back to UIUC. Luckily, Kevin (another PHL scholar) and I had the invigorating topic of PHL to discuss.