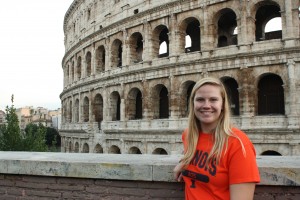 In the words of Daniel Gustafson of the Food and Agriculture Organization of the United Nations, “Food loss and waste is not an accident. There are many cultural, economic, and technical reasons that must be addressed.” I think increased educational opportunities for farmers could solve most of these problems.

When most people think of education, they picture a classroom full of young, eager kids, and in America, this is widely true. However, in countries that are most affected by postharvest loss (PHL), many producers cannot read or write well enough to gain valuable information from a classroom setting. The knowledge they possess stems from their hands-on experiences.

Some of the biggest causes of PHL are due to a lack understanding. For instance, in many developing countries, tomato farmers harvest tomatoes by picking them by hand and throwing them to collection points. Because the tomatoes leave the farm at the end of the day to go to market, the farmers never see or hear about them again. They don’t even realize the damage the tomatoes undergo. This practice can create up to 100 percent losses in some batches of tomatoes. However, since there are no education programs in place, the problem remains. Because their cultures are not as supportive of classroom settings, they need more effective ways to relay this information.

In other developing countries, farmers lack the know-how to raise their crops properly. Basic biological principles that farmers in America take for granted ­- such as when to plant, harvest, and apply fertilizer – are way beyond the capacities of the educational systems in other countries. This lack of information is certainly a problem for Caribbean cassava producers. A harvest delayed or hurried by even a few days can prove problematic, because there is a narrow window of time where cassava has the proper starch content. Due to a lack of education, however, farmers don’t realize the detrimental effects of inappropriate harvesting times.

Although there is still much room for improvement, agricultural education in America has long been addressed. One of the most important contributors to this was the Smith-Lever Act of 1914 that established the 4-H program. 4-H caters to developing skills in youth by educating them on developments in science, technology, and agriculture, among other things. It provides a viable route to spread research done at big universities to individual farmers and their families.

The establishment of programs like 4-H in developing countries could significantly reduce their postharvest losses. The youth of today will soon be the leaders, farmers, and scientists of tomorrow, so setting them up with a solid foundation in these areas now sets them up for success later. 4-H would provide a way to introduce the practical, hands-on research and technology small farmers in developing countries need.

As a 4-H member, the organization’s motto of “Learn by Doing” really resonates with me. Even in our culture that supports classroom learning, I’ve learned so much outside the classroom through 4-H. I think 4-H is something that would be effective in reducing PHL in  developing countries because of its hands-on nature.