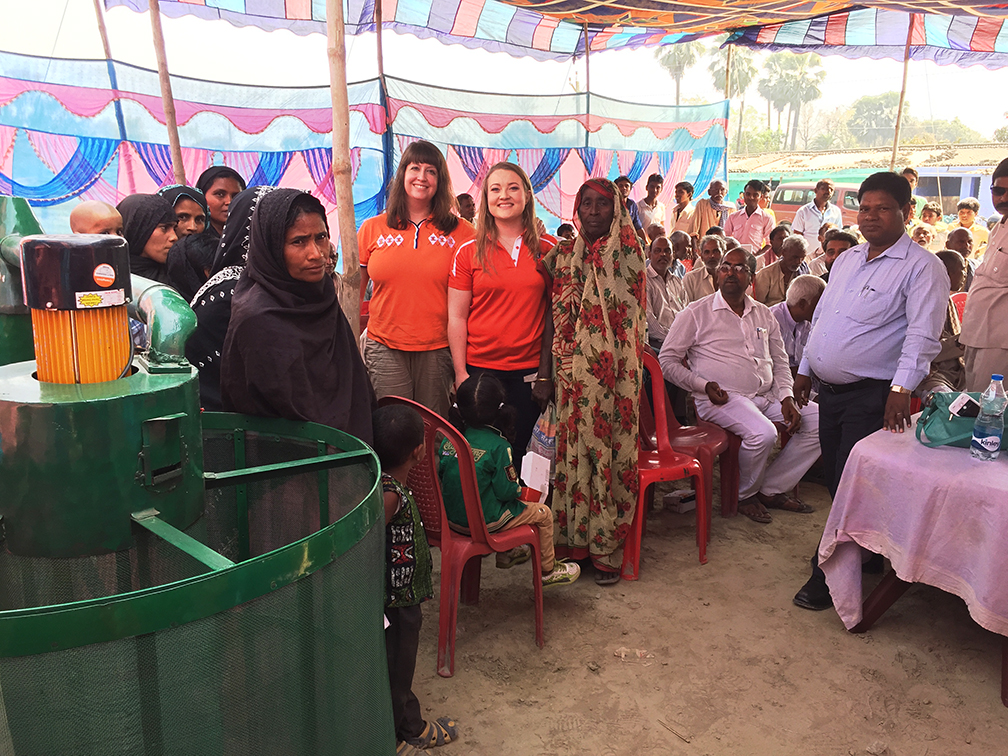 At the beginning of March, Mindy Spencer and Ashley Nagele took their first trip to represent the ADM Institute in Bihar. Their time in India gave them opportunities to interact with local farmers participating in postharvest loss prevention work. The pair had the opportunity to meet with farmers from various parts of Bihar, including Dih Sarsauna, Motihari and Hemra. Farmers representing each of these villages met with Mindy and Ashley to discuss the PHL prevention efforts in the communities. Demand for hermetic storage bags is at an all-time high, and producers are excited about the upcoming implementation of technology centers. The centers will be complete with STR dryers, mechanical threshers and mills to aid in postharvest processing. Increased interest in the SuperGrain bags has kick-started the ADMI bag distribution program, in which more than 17,000 hermetic storage bags will be made available during Rabi harvest season in late April. The primary crops harvested during this time are wheat and lentils.

In addition to technological resources, farmers have identified the need for specialized postharvest technique trainings targeted to women. Women perform 70 percent of the postharvest work and play a significant role in the food industry in India. Female leaders are being identified at the village level to help coordinate women-only trainings.

Along with the various village visits, Mindy and Ashley traveled to Sabour to attend Bihar Agriculture University’s Kisan Mela, a farm show similar to the Farm Progress Show in terms of size and agricultural importance. More than 10,000 farmers from all over Bihar traveled to attend the event. Several departments from the university had booths displaying their current research projects. The Department of Agricultural Engineering’s stand featured an STR dryer. With interpretation assistance from local partner Satish Kumar, Mindy and Ashley addressed the grandstand audience about the institute’s local efforts to mitigate postharvest loss and announced the upcoming storage bag sales.

The trip involved a great deal of travel; over the span of a week Mindy and Ashley covered more than 525 miles of roadways to attend meetings with farmers and project partners. The experience was very eye-opening and rewarding for both of them. The pair returned filled with new ideas about how to tackle education and outreach programs in Bihar, with a greater understanding of Bihari agriculture to boot!