Loss-Free Agriculture – Science or an Art?

Dr. Sonka worked in the fields as a young boy on his family’s farm. Credit: S. Sonka

In early May 2014, I was asked to speak at the 2nd Annual UN FAO SAVE FOOD Congress in Dusseldorf, Germany, on the suggested topic, “Agricultural Management: The Art of Loss Free Agriculture”.

That title caused me to reflect on where I learned about the reality of agricultural management— as a boy growing up on a small-scale Iowa farm in the 1950s.

At as early as 8 years old, I was out in the field. [I thought I was helping but, upon reflection, this actually may have been a form of rural babysitting.] As I thought about my remarks for the SAVE FOOD event, I compared these recollections with what I’ve come to observe and learn about farmers around the world.

In Bangladesh and India just as much in Iowa, it seems to me, there is both a science and an art to reducing postharvest losses.

Many know that insufficient use of effective technologies – from harvesting to processing to storage – is a major cause of postharvest losses in developing countries. Often we refer to these types of technology as hard infrastructure: mechanical harvesters, threshers, dryers, storage structures as well as roads and access to electricity. The design, construction, and operation of these technologies is where we think of the science being involved.

The art, then, involves how these technologies end up being used by real farmers, managers, and communities. As I shared at the SAVE FOOD Congress, this happens when the appropriate “soft infrastructure” environment is in place.

Reflecting on my family’s experience helped me to identify the role of the surrounding environment (an ecosystem, if you will) that fostered the adoption of innovations in our community. That surrounding environment enabled farmers, such as my parents, to be better able to evaluate and adopt innovations which led to enhanced efficiency, including those that reduced postharvest loss.

This support system is interesting because if one had driven down the road in rural Iowa, it would have been difficult to see or touch the elements of that system. (Today we might describe this as a virtual system.) This system formed soft infrastructure needed to support effective agricultural management – in contrast, to the visible nature of hard infrastructure. Some elements of this system are: 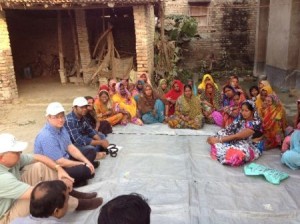 As specified in the classic ‘adoption’ literature, our community had its share of early adopters, who sometimes successfully and sometimes unsuccessfully, led the charge to improve their farming operations. However, adaptation to the local needs of farming in our region generally was required, even for innovations that had been “successfully” adopted elsewhere.

Adoption by the majority of farmers did not occur just because one early adopter reported a success. Instead, those farmers in the next cohorts of adoption (early majority and majority) sought out multiple sources of information to confirm the early adopter reports of success. The role of the extension agent and research reports were important; as well as the informed opinion of key agribusiness influencers.  Not all the information needed to be uniformly positive; however, a reinforcing feedback system operated (informally) so that a consensus emerged.

A key component of the feedback system related to resolution of problems.  If a mechanical component of the innovation failed or if its expected performance wasn’t achieved consistently, farmers needed to be confident that support would be available to respond to those issues. The extension/research system on the public side and private sector suppliers were essential to responding to those needs.

4)      The capability for organizational innovation

In some instances, the economics of employing the innovation exceeded the scale of the typical farmer. However, if the innovation was employed among a number of farmers, the benefits could be provided as an economically attractive option. Therefore in addition to changing the technology of farming, organizational innovation was required. These innovations took various forms (informal farmer groups, cooperatives, and adaptation of offerings of private firms).

I have heard numerous experts assert that reducing postharvest loss is not rocket science. This statement probably stems from the notion that creating appropriate technologies is not a particularly complex topic. Indeed, much of the technology we need already exists. It is important, however, to focus on how innovations are adopted – the art – for loss reduction and more broadly, for making supply chains more efficient and resilient overall.

What are your thoughts on this concept?