by Dr. Prasanta Kalita, Director of the ADM Institute for the Prevention of Postharvest Loss 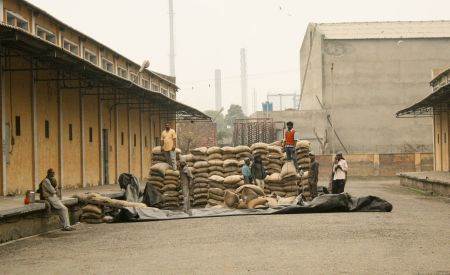 As it begins to rain, laborers at an FCI facility cover sacks of grain
in open storage. Credit: ADMI/K.Wozniak

Estimates suggest that 1/3 of all food is lost or wasted after it is grown in supply chains and at the consumer level. In many developing countries, this happens at especially high rates during storage phases. Yet a drive down Interstate-57 from Chicago to our central Illinois campus at Urbana-Champaign will confirm that, indeed, technologies do exist that effectively preserve grain in storage after harvest. So why aren’t those innovations available and used by farmers around the world? This is a question the ADM Institute is aiming to address.

While some countries like the United States have progressively developed more advanced technology to support its agricultural supply chains, it isn’t a novel concept that others countries have not. It also isn’t a new idea that postharvest losses are a problem. In 1975, then Secretary of State Henry Kissinger raised the issue with global leaders at a special session of the UN General Assembly, calling for the massive reduction of losses to improve food security worldwide.

Therefore, the starting point of our inquiry into the complexities of loss issues has been to ask WHY haven’t the right technologies been provided all along. The Indian loss example is a powerful illustration of why looking at the systems that drive technology availability and adoption is critical. A common critique of the Indian Public Distribution System is that millions of tonnes of grains are lost in storage due to inadequate facilities. Yet, as even a group of institute-sponsored undergraduate students observed on a recent trip to India, there are available options for more advanced storage. The students visited a facility established under the construct of a public-private partnership in Moga, Punjab, a “breadbasket state” in India (you can read their reactions here). The facility was modern –similar-looking to the silos we see in central Illinois. One senior manager explained how commission agents block many attempts for changes and efficiency improvements in supply chains, however, because they benefit from serving as middlemen in the system that exists now. (A recent news article in the Times of India gives another example of what results because of conflicting interests between commission agents and grain inspectors). 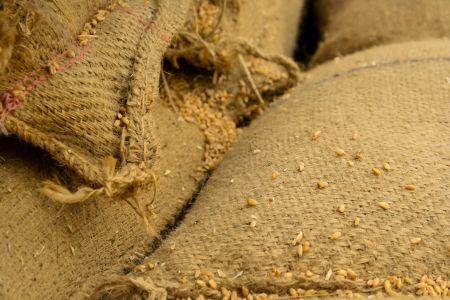 Losses are ‘events’ that are caused by interactions between patterns and events within food systems. Credit: ADMI/K. Wozniak

In this example, a lack of technology adoption is the consequence of an underlying problem – the political influence of agents along the supply chain. This interaction can be described using a systems perspective, where the dynamic relationship between structures and patterns within a system ultimately results in ‘events’. These events, in this case the losses that occur in postharvest stages of the supply chain, are what we end up seeing. In this blog post, ag economist Steve Sonka explains the systems perspective further, explaining how, because it looks at the root cause of the problems of loss that we see, this perspective is essential to prevention efforts.

Two ag economists the institute has funded found a good way to portray the complexities involved in preventing postharvest loss. Based on their investigation of Indian grain markets in three states, they have said, “Some people on the outside look at postharvest loss in India and say we need to develop a better mouse trap – to develop better storage. Our point is that although that’s a good thing, if you don’t have the right policy and economic incentives, the best mouse trap still won’t help.”

Their research, which you can read more about here, is one of many examples of how our interdisciplinary approach is working to identify the right points and kinds of technology interventions for postharvest loss.

We believe this will be the way impact is made for this important food security and environmental sustainability issue, and invite you to share any thoughts of your own about how to prevent and reduce postharvest loss around the world with us.