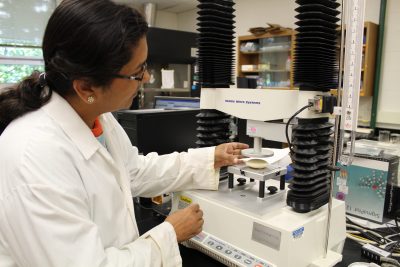 This summer, the ADM Institute for the Prevention of Postharvest Loss and the College of ACES Office of International Programs have hosted three faculty members from Haryana Agricultural University (HAU) in India. Sangeeta Chahal, Vijay Singh, and Yadvika have been at the University of Illinois since the end of June.

During her time at Illinois, Chahal has been working with Andrade on a project to use soybeans in idli, a savory rice cake popular in India. Traditionally, idli is made with fermented black lentils. Soybeans have more protein and fiber, so it would make a healthier product. “This would introduce a new variant into the diet, and it might be used in other countries as well,” Chahal said.

However, the alternative recipe would not be acceptable if it did not look and taste like traditional idli. So Chahal has been conducting texture analysis on the soybean recipe as compared to a traditional recipe. Idli is springy and soft, so the analysis considers how the idli responds when it is bitten or squeezed. If it doesn’t feel the same, Chahal said, it would probably not be accepted.

Vijay Singh is an assistant professor in the Department of Processing and Food Engineering at HAU. At the University of Illinois, he has been working with Vijay Singh and Deepak Kumar in the Department of Agricultural and Biological Engineering. At right, visiting scholar Singh and Kumar conduct an experiment on biomass pretreatment using a laboratory-scale fluidized sand bath and steel tube reactors.

While at Illinois, Singh has been contributing to the lab’s research to investigate the effect of two-stage mechanical thermal pretreatment on improving the sugar yields from hydrolysis of lignocellulosic biomass, and optimize the process conditions. Singh has been conducting experiments with other lab members on a promising two-stage mechanical thermal pretreatment, combining liquid hot water pretreatment followed by the disc milling process, which can reduce or eliminates the need of any chemical and still leads to high hydrolysis yields similar to those from conventional pretreatments.

Yadvika is an assistant scientist in the Department of Agricultural Processing and Engineering at HAU. At the University of Illinois, she has been researching international pedagogy, observing classroom instruction styles, and participating in workshops and lab work related to bio-energy.