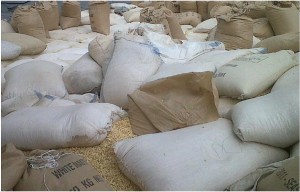 In order to address these significant losses, I coordinated four one-week Bags2Bulk training courses delivered in four districts of Zambia during 2014 to 2015.  The main objective of this training course was to strengthen the knowledge and skills of individuals operating in the grain value chain to transition from storage, transportation and trading of grain in bags to bulk. 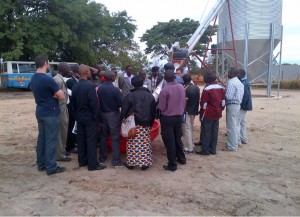 The training targeted farmers, grain traders and employees of agro marketing companies dealing with grains. Although women are involved in selling of grains in many rural and urban markets, their participation in the trainings was around 5% of the 120 individuals trained. Similar to what is obtaining in other SADC member states,  the participation of women in grain management training courses is generally low because women consider grain trading as a business for men.

The training focused on moisture testing, weighing, determining the quality of grain, grading, storage, storage pest identification and control, stacking and warehouse management. In order to strengthen the theoretical sessions and build the skills of the participants a lot of time was spent on practical work.

GSI, who are manufacturers of storage equipment, made a demonstration on the operation of a 30-ton metal silo for bulk storage. The participants were informed that bulk storage technology had advantages over bags because 30 tons of grain could be loaded and off-loaded from a truck in less than 20 minutes while it would take the whole day if it were bagged grain. In addition, bulk storage facilitated a more effective method of controlling storage pests using chemicals and reduced grain spillage. Although the participants appreciated the advantages of using metals silos, they could not afford to invest US$18,000 in such technology. Since farmers required storage capacity of 1.5-2 tons for grain kept for home consumption, the 30-ton silo was far beyond their requirement. In the case of grain traders, the 30-ton metal silo was too small for the volume of grain they handled. As a matter of fact, grain traders did not even store the grain after buying it from farmers as it was immediately transported to the big grain companies. One other practical problem was that although bulk transportation of grain was being recommended, there are very few trucks in Zambia that can transport bulk grain.

The lesson learnt from this is the importance of introducing technology which is appropriate and affordable. From the foregoing, it’s clear that the high cost of technology prevents small-scale farmers from making investments to protect harvests.

During the training, there were presentations from banks on the available credit opportunities. The presentation allayed the fear that banks cannot provide credit to small farmers because they belong to a category of risky borrowers which lack collateral.

The chemical companies made presentations on the pesticides available for preventing and treatment of grain against pests. During this presentation, it became clear that some of the farmers and traders had no knowledge that there were pesticides which could be used to control pests in stored grain.

The participants considered this training as an eye-opener and it will assist them in protecting harvests through improved grain handling and storage. The grain traders lamented that some of the companies where they sold grain did not have modern equipment for determining grain quality. They hoped that the large companies would be advised to invest in modern equipment and employ qualified staff.

The post-training evaluation conducted 6 months after the training showed that the quality of grain transacted had improved. The results further indicated that grain traders had reduced grain losses during trading to around 2% per consignment of 30 metric tonnes of grain.

The linkage of farmers and grain traders with private sector players such as bankers, silo manufacturers and chemical companies had led to a growing business relationship.  The traders were negotiating with the bank for better interest rates on loans which they could use in the procurement of grain. The manufacturers of metal silos were planning to introduce a product with a storage capacity of less than 5 tons, and it would cost within the range affordable by farmers.

These results demonstrate the importance of strengthening the knowledge and skill of actors along the commodity value chain and the involvement of private sector in activities aimed at protecting harvests. There is also a need to increase the numbers of women participating in such training courses, because of their key role in protecting harvests.